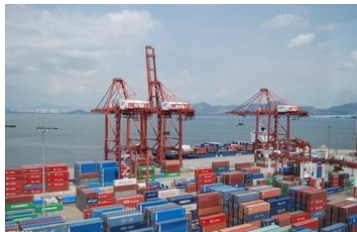 In the first half of the year, Dalian Portâ€™s earnings increased by 29%, which was affected by the macro economy during the period. However, since the mainland economy stabilized in May, it is cautiously optimistic in the second half of the year and expects gross margins to fluctuate little. As for the Northeast flooding, it will affect the grain and container collection business, but small fluctuations will not cause any impact on the core business. In the second half of the year, it will focus on new processing and transportation. In addition, the Group pays close attention to the development of the Free Trade Zone and believes that this experience can be extended to other regions.

Xu Song said, the Northeast and other unexpected factors or floods caused by short-term impact, but little diversification of the Group's business, expected long-term impact on the Group. He added that the floods have led to a reduction in food production, which has affected containers and other related businesses. He also mentioned that the decline in overall automobile sales during the period was mainly due to the decline in Japanese imports, but it had little impact on related businesses. He stressed that the Japan route is the main route in Dalian port.

At present, the Group is working with Shanghai Anji Motor Transport to build Dalian Haijia Automobile Terminal. By the time it is completed in 2015, the terminal will increase its handling capacity to 800,000 vehicles, which is currently 450,000 vehicles. Asked whether it will establish a free trade port, he said that Dalian is studying relevant issues, and also said that it already has a bonded port area and will pay attention to the development of the Shanghai Free Trade Zone.

Executive Director and Chief Accountant Su Chunhua added that in the first half of the year, the Groupâ€™s subsidy expenses increased by approximately RMB 35 million (RMB, the same below), which is expected to be small in the second half of the year. As for the medium-term notes due to expire in April and May next year, she said The Group has sufficient funds to raise funds at low cost or may issue short-term financing notes. On the other hand, capital expenditure will maintain 10 to 12 billion yuan for the whole year, of which 695 million yuan will be for the first half of the year.